It’s been a very busy month or so. June is always like that, it seems. There’s ARRL Field Day, which is always the last rainy weekend in June. This year, Cisco Live was in June, and that typically includes Tech Field Day activities. Right before that, we had the whole family in town for a family reunion. There was all sorts of stuff going on. Now that most of that has blown over, I’ve collected my thoughts and wanted to talk about Cisco Live this year.

Those who are of any importance in the networking world (LOL!) converged on Orlando this to attend the conference. Orlando brings back all sorts of memories — from Taverna Opa to Sizzler to LISP explained with plates — and we’re all familiar with the Orange County Convention Center. It’s a great facility with enough room to handle the largest of gatherings. I don’t think I saw the attendance numbers, but I would guess there were 30,000 attendees at Cisco Live this year. A typical crowd for the event, and the venue was more than adequate.

This year, I went on the Imagine Pass instead of the full conference pass. This pass included admission to the World of Solutions, the keynotes, the social media hub, the CAE, and meals. This sounds a whole lot like the Social Pass from the last 84882 years, right? Well, it is except for the food, which was expected to be of a much higher quality than the box meals we’ve been getting the last few years. Did that work out?  I really didn’t think the food could get any worse, but I was wrong. I would up only partaking only three times all week. It was that bad. Here’s an example. 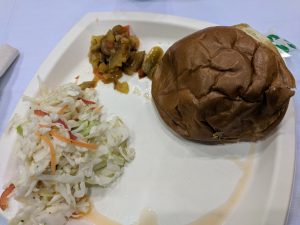 That’s a barbecue pork sandwich and cole slaw. It tasted worse than it looks.  I wound up just throwing it away.  If the Imagine Pass was the same price as the old Social Pass, I wouldn’t think much of it.  The going rate was $400 MORE than the Social Pass, though.  This isn’t a $400 sandwich.

Since I wasn’t attending sessions all day, I was able to walk around the World of Solutions and talk to some vendors. It was exactly what I thought it would be. Was it mind-blowing? No. It met all my expectations and needs. That’s it.  Of course, the usual suspects were there doing their part — DevNet, the Technical Solutions Clinic, the Walk-In Self-Paced Labs. Of course, our favorite of all-time was there, too. 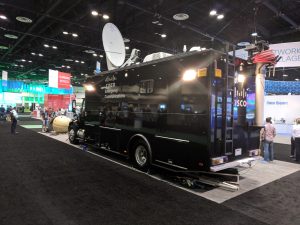 Cisco Tactical Operations. Look up those guys. Learn what they do. Be jealous that you don’t do that for a living (then figure out how to do this in your own tow, county, state, country).

For me, the biggest problem of the entire event was actually where the Social Media Hub was located. It was on the floor of the World of Solutions, which caused some problems. No one could access it until the World of Solutions was actually open. The team at the Social Media Hub was hard at work Saturday, Sunday, Monday, while the Twitterati were locked outside until the doors opened on Monday. Do we really need to actually be standing at the Hub to tweet? Of course not. The Hub, though, has always been a place where the social media participants can meet, get caught up with everything going on at the event, and fully interact with the team. Opportunities lost. Since the Hub was inside, we actually all got kicked out on the last day of the event as they began tearing down the World of Solutions. Not fun for us, but definitely not fun for the Social Media team who had to relocate unexpectedly. Next year, let’s just put the Hub outside, alright?

The Customer Appreciation Event (CAE) was at Universal Studios again. I don’t think I need to tell anyone that this is a great place (if you like that sort of thing), but it is Florida and it is outside. That means we got rained on. I got soaked! It was fine, though, since we got to catch a few songs from Cake. I’ve never even heard of the other acts, so I spent the rest of the time trying to dry off (don’t underestimate exactly how wet I actually was) and enjoying the cuisine.

Will I go to Cisco Live again next year?  No doubt.  Will I go on the Imagine Pass?  Not even if someone else pays for it.

Send any  questions to me.

jac
Aaron does lots of stuff and, therefore, does nothing well. He's trying, though.

Latest posts by jac (see all)

← An Update for my Adoring Fans
Automating My World →

Aaron is a Network Engineer by trade who wants to automate everything he does to the point where no one calls him any more.